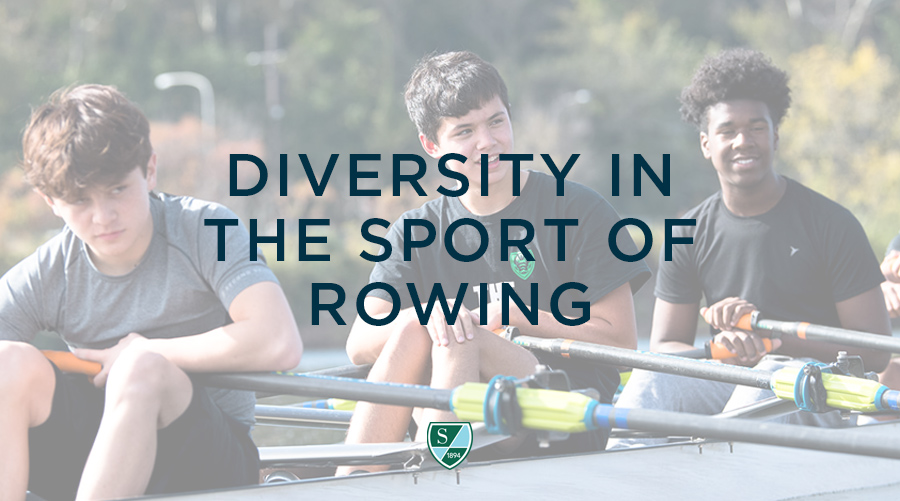 Diversity in the Sport of Rowing

Shipley's Director of Rowing, Scott Gavin-Wisniewski discusses the lack of racial and ethnic diversity in the sport of rowing and how Shipley's Rowing Academy is working to counteract that. The program's strategic partnership with Philadelphia City Rowing (PCR) both informs how we advance DEI within Shipley's program, while also advancing equity in the broader Philadelphia community through our support of their efforts.

There is simply nothing like competing in a well-practiced boat with people you love, trust and respect. To those that love it deeply, rowing can be an almost spiritual experience; gliding over the water like a bird, tied to your teammates with a nearly telepathic connection to one another. Rowing’s magic and its purpose is to bring people together like few other sports can; it is the essence of ‘team sport,’ where me and I are superseded by “we.” When done correctly, a winning boat shares the joy equally, and rowers reap even greater satisfaction by knowing that they not only succeeded for themselves, but for their teammates.

Why, then, when we look at images of crews at every level is it so hard to find diversity in the faces of its participants? Though rowing has contributed to the shifting landscape of collegiate athletics, which has helped to tilt the gender balance toward equity, it remains a mostly white sport.

In 2021 the NCAA conducted a study of gender and race in sport and found that 77% of all women who participated in rowing identified as being White; 5% as being Hispanic, 3% as being Asian and 2% identified as being Black; which ranks rowing among the bottom third least diverse sports of the 45 NCAA sports polled. (Men’s Rowing is not an NCAA sport and therefore no statistics are available).

Rowing is, however, a balancing force for equality in varsity athletics. Though far from “balanced,” rowing has advanced gender equity since Title IX was applied to sport in 1972. According to a 2007 article in the Virginia Pilot, “rowing is the fastest-growing sport in the NCAA.”

Where gender equity in collegiate athletics is concerned: an AP News article reported; “There were 4,242 girls rowing in high schools across the United States in 2013-14…That same year…” the… “NCAA and NAIA programs handed out 2,080 rowing scholarships — an average of one scholarship for almost every two high school rowers, compared to a 40:1 ratio for women’s soccer, a 46:1 ratio for women’s lacrosse and a 55:1 ratio for field hockey.”

Though some may justifiably argue this is still not proportional to the resources allocated to Varsity Men’s Football teams, no one can argue that Rowing does not provide great opportunities for women in collegiate athletics.

In many ways, the early history of rowing is fraught with stories of the sport being intentionally exclusive. The Royal Henley Regatta, one of the most prestigious rowing events, famously excluded Philadelphia Jack Kelly from the 1920 Regatta because he “worked with his hands,” an illustration of how embarrassingly exclusive rowing’s top events had become. Just five African Americans have participated in the Olympic games as rowers and the first African American male to do so, Aquill Abdullah, didn’t cross that barrier until 2004.

In December 2021, the Shipley Rowing Academy interviewed Aquill Abdullah regarding the subject of diversity in rowing and he related this of his experiences: “There was never any hiding for me. I didn’t get to be just a guy walking into the boathouse because of the color of my skin…” You often forget what it is to be ‘other.’ How do we make boathouses a place where people don’t feel “othered while creating access and opportunity?”

Boathouses have moved painfully slowly to adopt diversity, equity, and inclusion principles and there is a growing divide between what happens inside boathouse walls and what the communities they reside in are doing.

There are a few pioneering programs across the country that are working to change that narrative. Shipley Rowing Academy partner; Philadelphia City Rowing (PCR) is one of them. PCR “is a free sports-based youth development program that uses rowing to empower students from the School District of Philadelphia…by providing academic support, nutrition education” …and a… “highly structured athletic program.” Programs such as PCR are giving students in the Philadelphia Public Schools system a much different experience, where socioeconomic and racial diversity are a given on their teams.

This underfunded non-profit is one of the most effective in the region at introducing new students to the sport and it is changing lives for the better. However, challenges to this program are ever present. Without an indoor space to train, PCR students must train outside or cancel practice in poor weather. Additionally, the program must renew a racing exemption to compete in Philadelphia every few years, a stress for its members and its staff. These programs must continue to be supported so they can continue to do the great work that they were founded to achieve.

A Note from Scott Gavin-Wisniewski,
Director of Rowing, The Shipley School

Shipley Rowing is committed to creating an inclusive community on our team. Diversity, Equity, and Inclusion are embedded in our Strategic Plan and are critically important to our organization. A key part of our ambitious 10-year strategic plan involves mutually beneficial partnerships with Philadelphia City Rowing (PCR). PCR both informs how we advance DEI within our own program, while also advancing equity in ways that we are unable to do.  By leveraging a non-profit structure, PCR provides free programming to inner city students, offering nutritional, educational, and recreational education for their athletes.

As a permanent member of the PSRA, the governing body that regulates scholastic rowing in Philadelphia, Shipley Rowing votes with PCR’s interest in mind, ensuring they have affordable racing opportunities. Additionally, facilities are a major hurdle for PCR and we are working jointly to see if there are alternative solutions that can benefit both teams.

Finally, we believe in the importance of representation, and we relate a diversity of experiences to our students. This December, for example, we interviewed Aquil Abdullah, the first African American male to ever qualify in Crew for the Olympic Games; and the images we show to our students offer an aspirational spectrum of diversity in rowing. We want our students to see high level rowers of all backgrounds and believe it’s possible for them.

Finally, we as an organization work hard to make sure that any student with an interest in rowing can participate. Our rowing center on campus is a great resource which we can use to expose Middle and Lower School students to the sport of rowing at an early age.

Rowing serves as a moving meditation for many of its participants. Moving a boat in concert with other people requires focus, fitness, determination and can forge lifelong bonds between teammates. But if the sport itself hopes to survive, it must begin to look more like the communities it serves. For that to happen, much more work must be done. 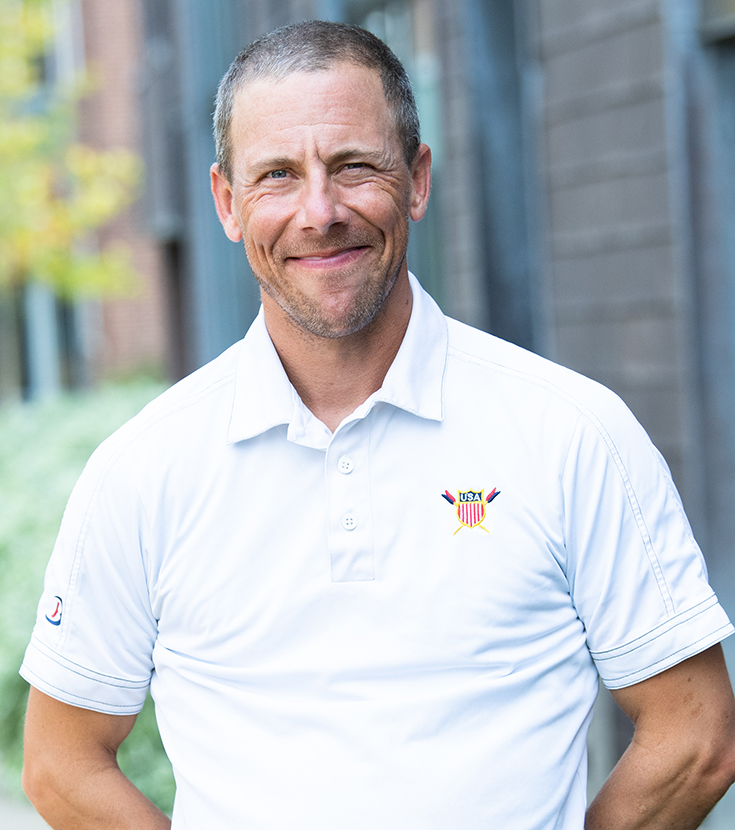 Scott Gavin-Wisniewski is Shipley's Director of Rowing. He brings experiences as the Head Coach at Cabrini University, Washington College, Villanova and Vesper Boat Club in addition to experiences at the University of Pennsylvania and Yale University. During his 13-year tenure as a rowing coach he instructed 21 athletes on 6-US National Teams, highlighted by silver and bronze medals at the 2011 Pan American Games, a 2nd place finish in the Elite Women's 4x at Women's Henley and a 6th place finish at the 2011 U23 World Championships. In 2013 and 2014, programs under his direction won the Overall Team Points Trophy at the USRowing Club National Championships. In 2008 he served as an Assistant Coach at Yale University. As an athlete, he was nationally competitive as an Undine Barge Club member from 2001-2008. As a collegiate athlete at the University of Pittsburgh he was the captain and president of the Panther Rowing Club. As a coach, he believes that athletes perform the best when they are happy, can maintain a low level of stress, have a strong connection with their teammates and feel like they are improving.