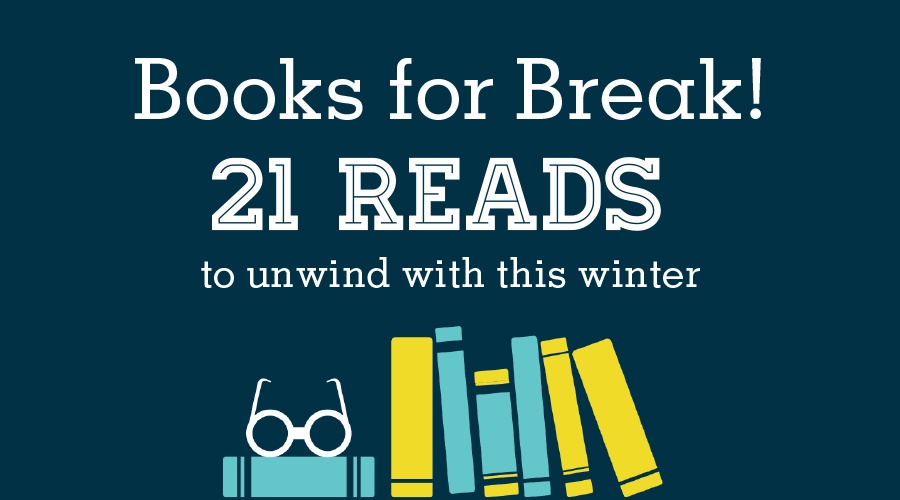 Books for Break: 21 Reads to Unwind with This Winter

With Winter Break upon us, there’s no better time to curl up with a good book. Below, you’ll find Shipley faculty and staff’s recommendations for great reads across genres.

1. Small Great Things by Jodi Picoult
Jodi's stories are engaging right from the start. She does thorough investigation of her topics and I often follow up by reading the books that she used for research. – Debra Finger, Assistant Director of Educational Technology, Lower School Technology Coach

5. Kindred by Octavia Butler
This combines time-travel with slave narrative. Have you ever wondered what you would do if you lived in a time of slavery? – Elizabeth Zodda, Upper School Science Teacher and Coach

6. All the Light We Cannot See by Anthony Doerr
Worth the status of having won the 2015 Pulitzer Prize for Fiction and the 2015 Andrew Carnegie Medal for Excellence in Fiction. – Christine Hutchinson, Middle School English Teacher

7. My Family and Other Animals by Gerald Durrel
There is a PBS series based on it that I just finished and I loved it! – Sharron Russell, Director of Student Support Services and Upper School Academic Support

8. The Orphan Master's Son by Adam Johnson
Of all the books that I read this season, this was my favorite. It won the Pulitzer in 2013. – Tony Morinelli, Upper School Interdisciplinary and Theater Teacher

9. To Live by Yu Hua
This is the story of a gambler’s journey from a spoiled, wealthy boy to a kind, peasant man. It’s my current read, and I highly recommend it. – Tony Morinelli, Upper School Interdisciplinary and Theater Teacher

10. Hitchhiker's Guide to the Galaxy by Douglas Adams
Nice easy book that is just a fun read. The world is coming to an end, but in the end, you are not left feeling bad about it. Also, this is the first of a series of books, so you can get hooked! – Chris Fornaro, Upper School STEAM Teacher, Math Teacher, and 9th Grade Dean

12. All American Boys by Jason Reynold and Brendan Kiely
This Young Adult book won the 2016 Coretta Scott King award. It centers on a black teen and a white teen dealing with the aftereffects of violence and the racial tensions that escalate because of it. – Wendy Eiteljorg, Director of Educational Technology, Upper School Technology Coach, and Upper School English and STEAM Teacher

13. Just Mercy: A Story of Justice and Redemption by Bryan Stevenson
This is a history of Stevenson's endeavor to create the Equal Justice Initiative in Montgomery, Alabama. It’s told through specific cases he took on to combat major injustice within the American justice system. – Charlie Biddle, Campaign Associate and Coach

14. A Little Place on the North Side: Wrigley Field at One Hundred by George Will
A history of Wrigley Field with many baseball stories. It’s appropriate since the book was written before this year's historical World Series win by the Cubs. – Andrew Shepherd, Upper School Science Teacher

15. Autobiography of a Recovering Skinhead by Frank Meeink
This is an unbelievable, true account of this South Philly man's life as a former skinhead. Raw, at times (often actually) unimaginable that it happened here in our city, it is a fascinating story of his life. The fact that he is even still alive with everything he did while still a teen is crazy. It’s heavy, but it has a positive ending. – Debra Finger, Assistant Director of Educational Technology and Lower School Technology Coach

16. Smarter Faster Better: The Secrets of Being Productive in Life and Business by Charles Duhigg
While a book about productivity may sound dry, Duhigg skillfully weaves personal stories about productive people around details from research into what drives productivity. – Lisa Chirlian, Upper School Mathematics Teacher

17. Food Rules: An Eater’s Manual by Michael Pollan
This is my current read, and it’s both straightforward and engaging. The basic premise the author gives is “Eat food. Not too much. Mostly plants.” – Sebastian Gluzman, Upper School Spanish Teacher and Coach

18. The Places That Scare You: A Guide to Fearlessness in Difficult Times by Pema Chodron
Chodron writes, "We can let the circumstances of our lives harden us so that we become increasingly resentful and afraid, or we can let them soften us and make us kinder and more open to what scares us. We always have this choice." – Marc Balcer, Upper and Middle School SEED Teacher and Coach

18. Peak: Secrets from the New Science of Expertise by Douglas Adams
Have a hobby that you’re trying to take to the next level? This book talks about the different ways we should approach various activities to get better. – Chris Fornaro, Upper School STEAM Teacher, Math Teacher, and 9th Grade Dean

19. The Professor, the Banker, and the Suicide King by Michael Craig
Story about the richest poker games ever played. While it has a bit more meaning if you enjoy poker, it can be read by anyone. The stories about the amount of money that is gambled will shock and awe those who are unfamiliar with the game. – Chris Fornaro, Upper School STEAM Teacher, Math Teacher, and 9th Grade Dean

20. March: Book One (and Two and Three) by John Lewis and Andrew Aydin
This is a graphic novel about Representative John Lewis' experiences in the Civil Rights movement. – Wendy Eiteljorg, Director of Educational Technology, Upper School Technology Coach, and Upper School English and STEAM Teacher